The planet Neptune. © based on NASA images

The planet Neptune is the eighth and farthest planet from the sun. It is also the smallest of the four giant planets in the solar system. Neptune has a rich blue color and is named after the Roman god of the sea.

Neptune was first observed in 1846. But very little was known about the planet until recently. Observations were limited because the planet is so far away. Then in 1989 the planetary probe Voyager 2 flew past Neptune.

The probe revealed some remarkable facts about the planet and its moons. Among the things discovered is that this planet has a thick atmosphere that grows denser with depth, gradually merging with a vast, strange ocean.

Neptune revolves around the sun once every 165 years. As it revolves, Neptune traces an ellipse. (An ellipse is roughly oval-shaped.) The planet travels a huge distance to complete just one orbit.

Neptune’s average orbital distance from the sun is enormous. In fact, this distance is about 30 times greater than the corresponding value for Earth.

Neptune’s magnetic field rotates once in about 16 hours. This is the length of the planet’s “day.” The rate of rotation of the visible features in Neptune’s atmosphere varies greatly depending on the features’ latitudes.

A dim and distant world 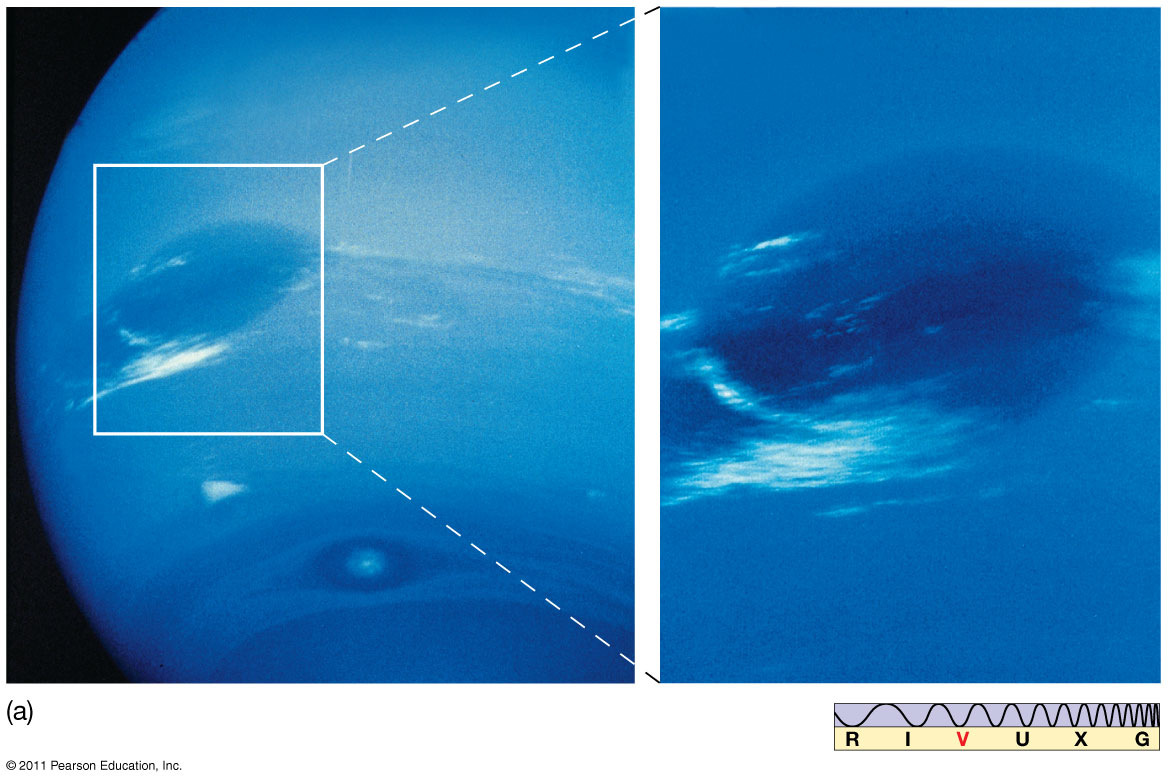 Neptune’s great distance from Earth makes it appear very tiny even when viewed through large telescopes. It is no wonder no one discovered the planet until Adams and Leverrier told astronomers where to look.

Also there are huge anticyclonic storms on Neptune, do you remember Jupiter's Great Red Spot? Something familiar can be seen on Neptune, it is called Great Dark Spot and it has about the same size as Earth. Unlike other planets, Neptune’s Great Dark Spot has winds with a speed of 2,400 kilometers (1,500 mile) per hour, the fastest in the Solar System.

Neptune, Jupiter, Saturn, and Uranus are the solar system’s gas giants. They are very different from Earth, which has a rocky crust with an interior of molten rock. Neptune has a deep, thick atmosphere of hydrogen and helium, along with traces of methane gas. The atmosphere becomes increasingly dense with depth. It gradually becomes less and less gaseous and transitions into a strange kind of fluid. This fluid is called a supercritical fluid. It has both gas-like and liquid-like properties. The supercritical fluid on Neptune consists of water, methane, and ammonia.

Although it has no distinct surface, it amounts to a kind of ocean. 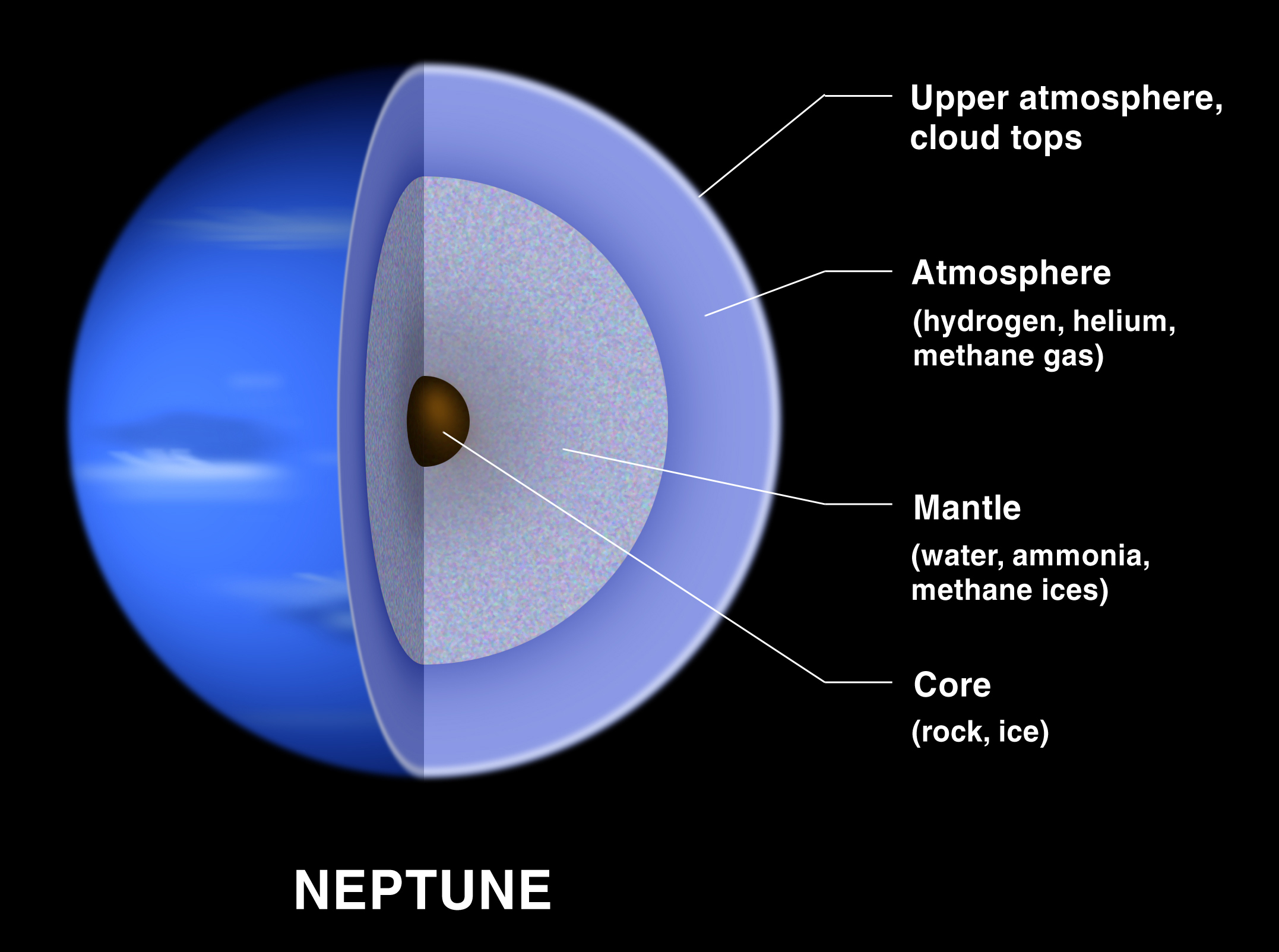 Neptune is different from the other gas giant planets. For example, Neptune and Jupiter have very different compositions. About 10 percent of Neptune’s mass is made up of hydrogen and helium gases. In contrast, Jupiter‘s mass is about 96 percent hydrogen and helium. The other 90 percent of Neptune’s mass consists mostly of heavier elements. These include carbon, nitrogen, and oxygen. On Neptune, these elements often occur in compounds such as methane, ammonia, and water.

Neptune appears blue because of the methane gas in its atmosphere. Sunlight is made up of a spectrum of colors that are absorbed by some materials and reflected by others. Methane absorbs the reddish colors in the spectrum. When sunlight shines through methane gas, the reddish colors are absorbed and the bluish colors are reflected. Neptune’s methane makes the planet appear blue. Thin, wispy clouds floating in the upper atmosphere are above most of the methane, so they appear white.

Below the clouds the atmosphere extends downward for thousands of miles. And the pressure and temperature of the atmosphere gradually rise. The atmosphere never reaches a solid surface or even a liquid surface. Instead, it gradually merges with a strange ocean. This ocean is not quite gas and not quite liquid. It is located at a depth of about 6,000 miles (10,000 kilometers). It is made up of water, methane, and ammonia. And it may have a temperature as high as 4500°F (2500°C). Neptune may have a rocky core about the size of Earth. The temperature at the core may reach 15,000°F (8000°C).

Triton, a world of ice volcanoes

Triton is Neptune’s largest moon, or satellite. It is slightly smaller than the Earth’s moon, about 1,700 miles (2,700 kilometers) in diameter. It circles Neptune once every 5 days and 20 hours. 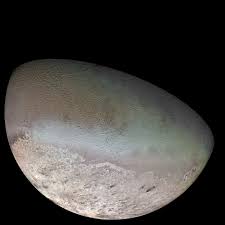 Despite these dry facts, Triton is very unusual. Most satellites orbit their planet in the same direction as the planet’s rotation. But Triton circles Neptune in the opposite direction. Some scientists think that Triton’s orbit is different because it was once a separate planet that was captured by Neptune’s gravity.

Among Triton’s other unusual features are ice volcanoes on its surface. Images show eruptions blasting material as much as 5 miles (8 kilometers) into space.

These materials include frozen nitrogen, dust particles, and other materials from Triton’s interior, which is quite warm. To explain this warmth, scientists cite a phenomenon called tidal friction. Tidal friction occurs when a body’s shape is changed during gravitational interactions. More precisely, tidal friction is the resistance to changes in shape.

Parts of Triton’s surface are wrinkled. Other parts appear to be covered by frozen lakes. In these places, water may have erupted from inside Triton and then frozen as hard as rock. Much of Triton’s surface is covered with fresh white snow. This snow cannot be ice formed from water because Triton’s surface is too cold. Instead, scientists think the snow consists of crystals of nitrogen that have frozen out of the atmosphere. Sunlight reflecting off Triton’s icy surface makes it one of the whitest objects in the solar system.

Triton is also unusual because it has a thin atmosphere consisting mostly of nitrogen gas. Most satellites are too small to hold an atmosphere. But Triton is so cold that even its weak gravitational force can hold its nitrogen atmosphere for billions of years.

Neptune’s other satellites and its rings 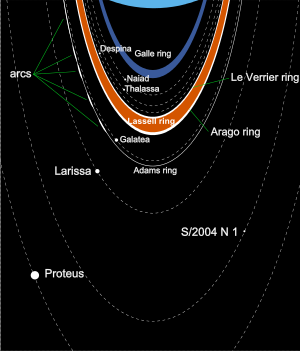 Neptune’s rings. © based on NASA images

Psamathe, the smallest moon, was discovered by Mauna Kea Observatory in 2003. It is only about 24 miles (38 kilometers) in diameter. It orbits about 30 million miles (48 million kilometers) away from the planet. Only Neso orbits Neptune at a greater distance.

There are four thin rings around the planet. The rings are probably composed of dust, bits of sand, and small particles of ice. They may also contain rocks and boulders. The rings may have originated from debris blasted off the small innermost satellites by meteorites. Or they may have formed from bits and pieces of a satellite that broke up long ago.

Unlike most planetary rings, which appear smooth and uniform, Neptune’s outermost ring has three bright arcs. These arcs may be caused by the moon Galatea, which orbits just inside the ring. A complex gravitational interaction between Galatea and the ring may cause light-reflecting ice in the ring to clump together in certain parts. This interaction also affects the moon’s orbit.

The one, brief exploration of Neptune by Voyager 2 certainly helped to expand our knowledge about the planet. But there is much about Neptune that remains a mystery. The next visit - perhaps around the year 2030 or later - will no doubt reveal much more about the beautiful blue planet near the edge of the solar system.