Jupiter is by far one of the most popular planets in the solar system aside from the earth because of its size. It is the largest planet in the solar system with a diameter of 142,984 km at its equator and it is the fifth planet from the Sun. Jupiter has a mass one-thousandth that of the mass of the Sun. But compared to other planets, Jupiter is 2½ times the mass of all the other planets combined. That’s why Jupiter is considered a gas giant in the Solar System. Jupiter is part of the four gas giants including Saturn, Uranus and Neptune. 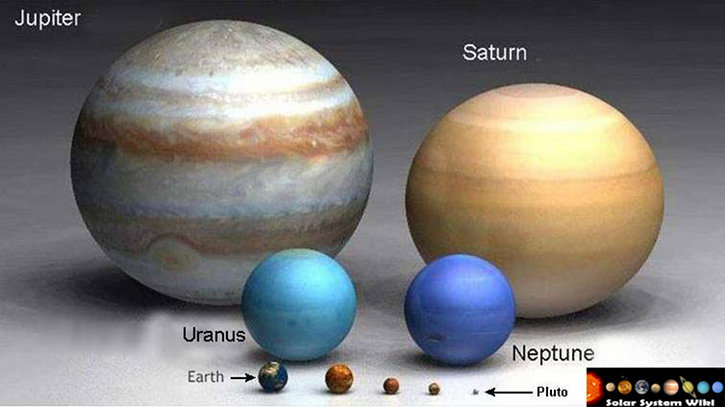 Jupiter compared with other planets. © NASA

Jupiter completes an orbit of the sun with every 11.86 orbits of the Earth so it primarily completes one orbit in 11.86 years. Jupiter’s axial tilt is also small of only 3.13 degrees making it not experience significant seasonal changes unlike Mars and Earth. Despite a relatively slower revolution around the sun, Jupiter has the fastest rotation among the other planets in the Solar System. It can complete one rotation in less than ten hours that results in a bulge in the equator.

Jupiter was discovered by astronomers during the ancient times and was associated with religious beliefs and mythology. In fact, Jupiter was used as the name for the Roman god Jupiter.

View from the Earth

Jupiter is considered the third brightest object in the sky at night when viewed from the earth next to the Moon and Venus.

Jupiter is mainly composed of gases primarily hydrogen and helium. Hydrogen makes up most of the gases with a mass composition of 75% while helium is a quarter of its mass of about 24%. The remaining one percent consists of other elements. The planet also has a rocky core although it does not have a well-defined solid surface. Jupiter’s atmosphere is also made up of methane, ammonia, water vapor and compounds that are silicon based. Other traces include ethane, carbon, sulphur, phosphine, oxygen, neon, and hydrogen sulphide. 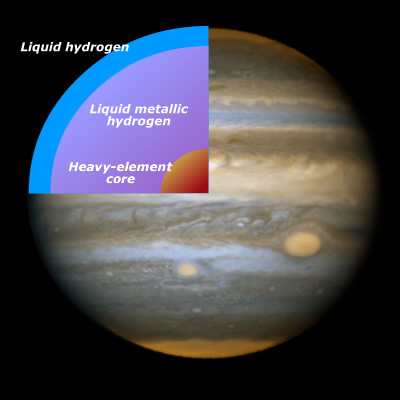 Jupiter has the largest planetary atmosphere in the Solar System with an altitude of 5,000 km. Since the planet has no well-defined solid surface, the boundary of the atmosphere and the planet’s surface is known when the pressure is equal to 10 times the surface pressure of the earth.

The outer atmosphere is segregated into bands at various latitudes leading to storms and turbulence along their boundaries. Because of these turbulence and storms, the Great Red Spot was formed. The atmosphere of Jupiter may also have traces of water clouds because of the presence of lightning on the planet’s atmosphere, which is thousand times more powerful than the lightning on Earth.

Aside from the Great Red Spot, which is considered a permanent feature of the planet, Jupiter is known for the brown and orange colors in its cloud. These colors are a result of the upwelling compounds that change in color when they are exposed to the Sun‘s ultraviolet rays. Jupiter is not a perfect sphere unlike other planets because of its rapid rotation. It has developed an oblate spheroid shape with a noticeable bulge along the equator. Jupiter is surrounded by a powerful magnetosphere and a faint planetary ring system. 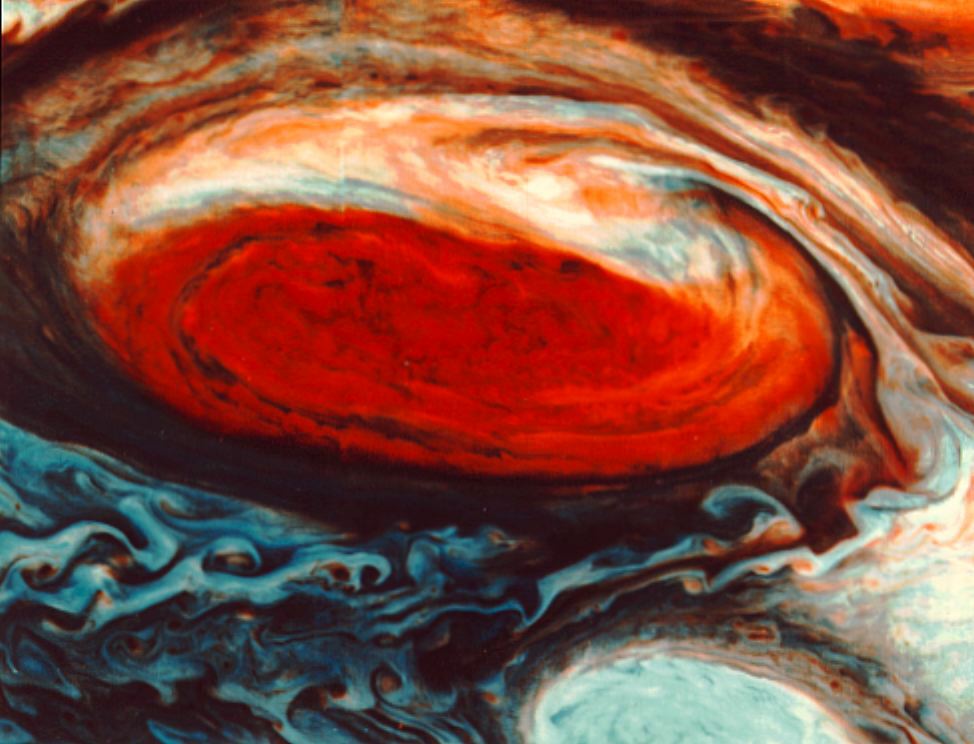 This popular red spot in Jupiter already existed since the 17th century and its size allows explorers from Earth to view it using a telescope.

The Great Red Spot in size is bigger than Earth. Studies have indicated that the Great red Spot is travelling around the planet and has travelled several times already since its discovery.

Because of the massive mass of Jupiter, which is 2.5 times of all the other planets combined, the barycentre with the Sun lies above the surface of the Sun. When compared to Jupiter, Earth is only a dwarf; however, it is considered less dense than our terrestrial planet. Jupiter’s size can hold 1,321 earths in total. The size and mass of Jupiter is said to be proportionate because in case Jupiter had more mass, the planet would shrink quickly. Because of the heat radiation in Jupiter generated by Kelvin-Helmholtz mechanism, the planet shrinks by 2 cm per year making it twice smaller than its actual size when it was first formed.

Jupiter has a rocky core beneath its deep layer of liquid metallic hydrogen. Despite the description of being rocky in its core, the detailed composition of which is still not known. The idea on the presence of rocky core was suggested by the use of gravitational measurements in the giant planet.

The planetary ring of Jupiter consists of three segments. The inner segment or the halo is an inner torus of particles, the middle bright segment is the main ring and the outer segment is the gossamer ring. The planet’s rings are made up of dust as compared to Saturn’s rings made of ice.

The giant planet has at least 67 moons. Among these 67 are the four Galilean moons, which were discovered by Galileo Galilei in 1610. These Galilean moons are large moons that are bigger in size than other moons and even planets in the solar system. The largest among Jupiter’s moons is Ganymede, which is larger than Mercury in diameter.

There were several robotic spacecraft missions to Jupiter. These include the Pioneer and Voyager missions and the Galileo orbiter. In February 2007, the New Horizons bound for Pluto was the most recent probe in the planet using Jupiter’s gravity to improve the speed of the probe. In August 2011, the Juno mission explored to study the composition of Jupiter further. 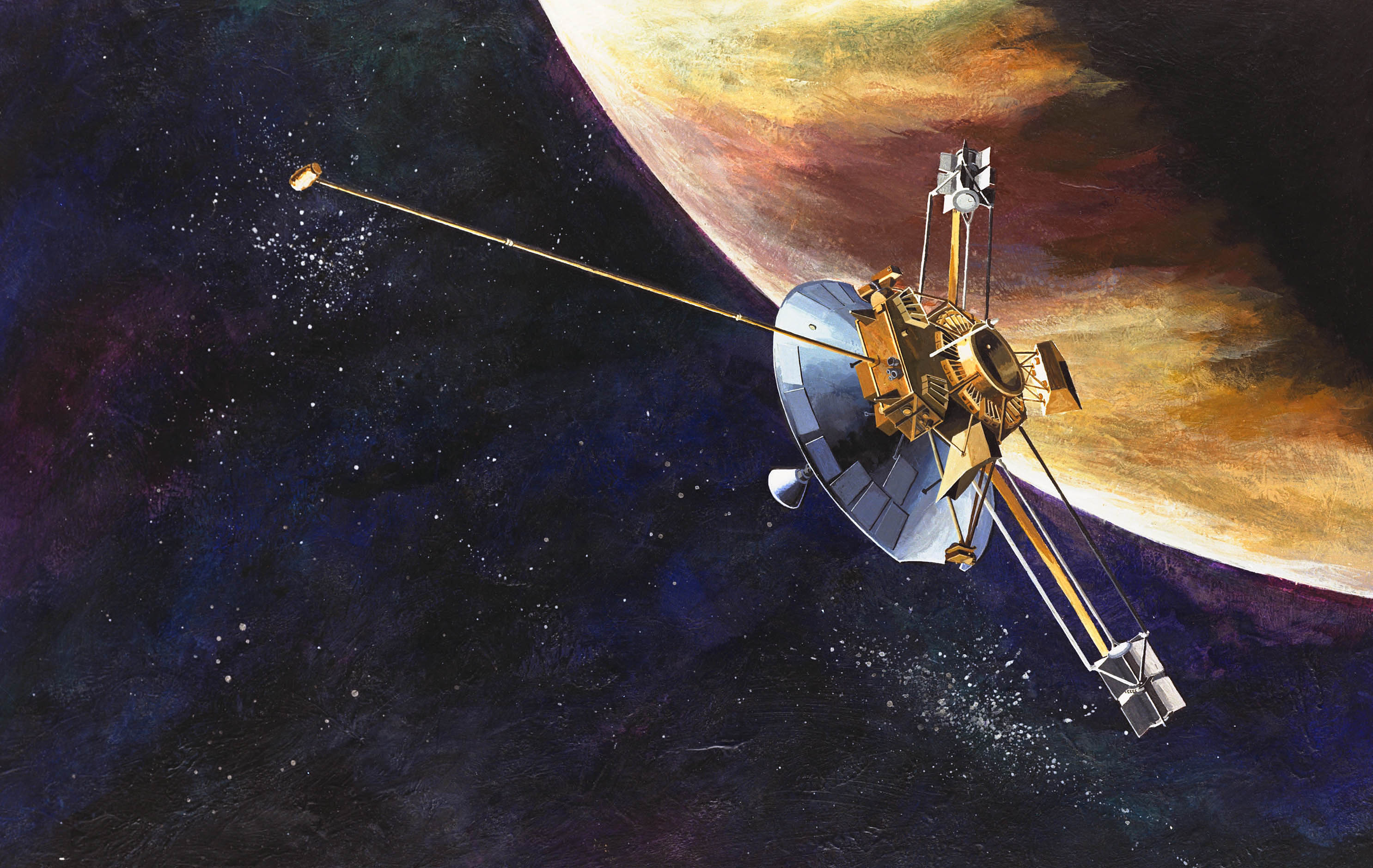 Pioneer fly by near Jupiter. © NASA

But before all these, Chinese astronomers revealed that they have discovered Jupiter’s moons starting in 362 BC, which is two millenniums earlier than the discovery of Galileo. Other several explorations were also made.

The size of Jupiter and the presence of various interesting moons and other features make Jupiter one of the most fascinating planets in the Solar System. Jupiter has attracted the interest of various astronomers, but the composition of Jupiter’s internal structure remains to be a puzzle so there are still other explorations to hit the Solar System giant.