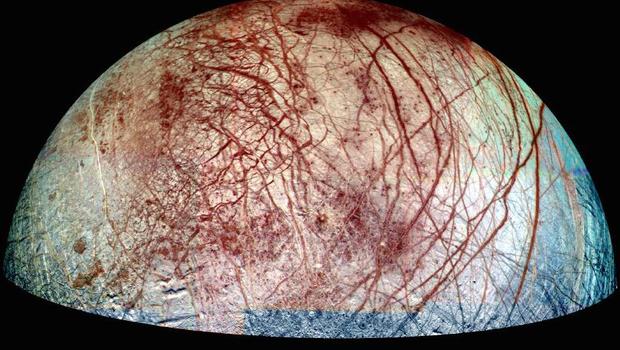 Europa. © based on NASA images

Europa is one of the four moons of Jupiter discovered by Galileo and the smallest of the moons he found. Europa is a little smaller than Earth’s moon, and it is the sixth largest moon in our solar system. Europa has a diameter of 3,100 kilometers. Europa is the sixth closest moon to Jupiter, though Io is the only large moon closer in. 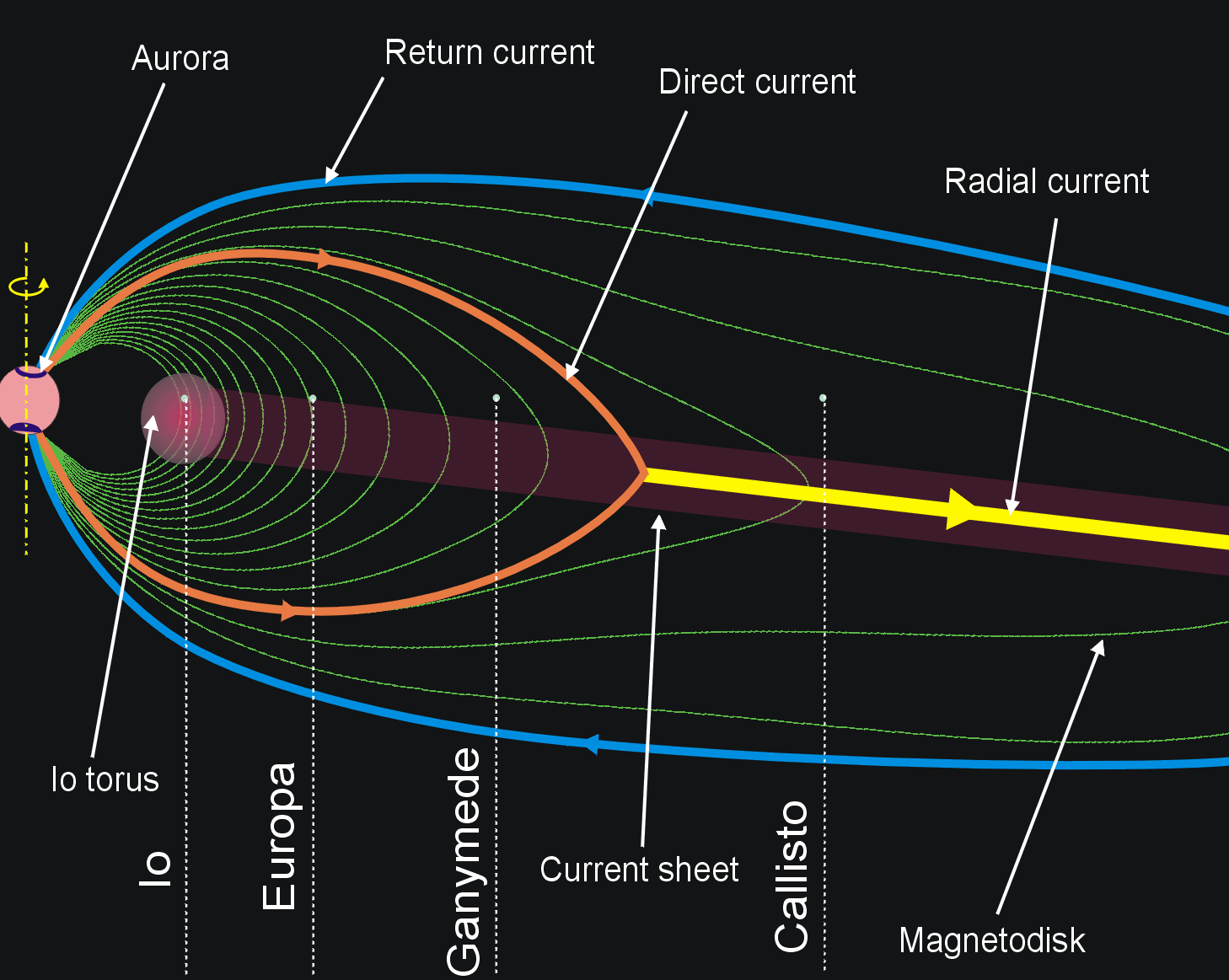 Europa orbits Jupiter roughly every 3.5 days. Its orbit has an average radius of 671,000 kilometers. Europa spins once per orbit, causing it to present the same face to Jupiter all of the time, similar to Earth’s moon. This means that one day on Jupiter is equal to its rotational period, approximately every 3.5 Earth days.

Europa’s surface is a near vacuum, with an atmosphere so thin it is called an exosphere. The wispy atmosphere contains traces of oxygen from the break down of water ice on its surface. Hydrogen is lost to the solar wind and Jupiter’s magnetic field while the heavier oxygen molecules remain near the surface. Europa has a very weak magnetic field, so radiation at its surface is strong enough to sicken and even kill humans if they were not protected from it. The surface of Europa averages -170°C.

Europa was one of the four moons of Jupiter. Europa was the smallest moon discovered by Galileo Galilei in 1610. He originally gave these moons numbers, but it was informally named Europa after a lover of the Greco-Roman god Jupiter. This particular lover was a Greek girl delighted by Jupiter in the form of a gentle white bull. Jupiter carried her off to Crete where she stayed with him and had many children. 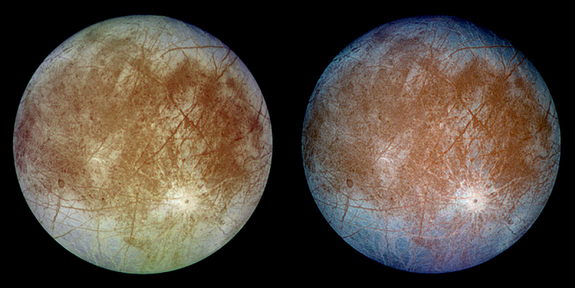 This picture was taken by Galileo probe, you can see Europa’s surface. © based on NASA images

The name Europa became official in the early 1800s when more moons were discovered around Jupiter and a naming system was deemed too confusing. Europa has signs that it is not fully tidally locked. If true, this means that Europa once had a faster rotational period and has slowed down over time as it became tidally locked.

Europa looks like a white icy ball with a network of reddish-brown cracks. Scientists were intrigued by the lack of large craters and its relatively smooth appearance. It has a number of small craters like Balor and Cormac, mostly named for characters out of Celtic mythology.

Europa is a rocky mass covered with water ice, but it lacks the craters and mountains it would be expected to have. For example, Europa has no large mountains yet it is subject to immense stresses due to its orbital resonance with the other Galilean moons and the gravity of Jupiter. Instead of canyons and mountains, Europa has lineae, brown cracks on its surface that appear to be filled in from underground. The likely cause is that there was an underground ocean between Europa’s molten core and frozen exterior.

How can Europa have an underground ocean? 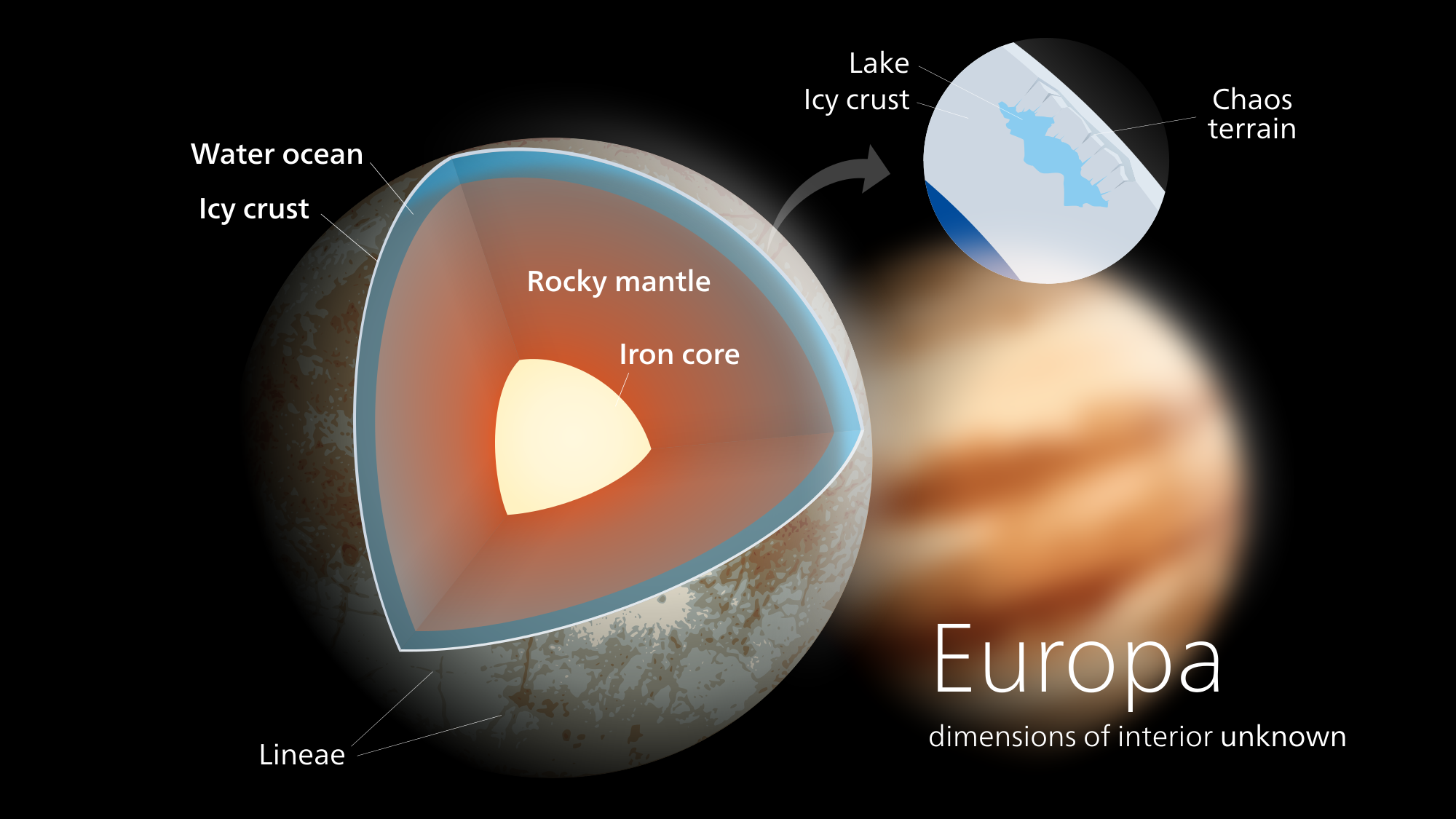 Jupiter and its moons can be compared to a small solar system. Jupiter does not radiate heat like the Sun. Instead, it exerts an immense gravitational pull on its moons. The four large inner moons Gallileo discovered also pull and push each other. Because three of the moons are in an almost perfect 1:2:4 resonance, with Io orbiting four times for ever two orbits of Europa and one orbit of Ganymede.

This constant flexure caused tidal flexing, causes Io to have physical tides up to 300 feet high. The other Galilean moons like Europa do not distort as far, but the constant flexure of the moons heats their interior. This is why Europa has a hot metal core and the heat to warm an ocean under its thick outer layer of ice. Europa also has areas called “chaos“. These regions have relatively high peaks up to 250 meters tall, high given that the surface is almost smooth, along with jumbled landscapes that resemble crashed tectonic plates. Astronomers with the University of Texas at Austin have proposed that these “chaos” features are caused by underlying liquid water lakes under the surface. If they do exist, these would be underground lakes surrounded by ice closer to the surface than the even deeper ocean surrounding Europa’s core.

Europa was the first moon proposed to have an underground ocean. However, data from the Galileo mission suggests that Ganymede and Callisto also have underground oceans. Io, alone among the Galilean moons, does not have an ocean because of its extreme volcanism.

It has not yet been proven that Europa has oceans that rival Earth’s in volume. The underground ocean theory is attractive because it would provide another habitat for life somewhere else in the solar system. Life on Europa would live in the ocean, fed by geothermal heat like life on the bottom of Earth’s oceans fed by “black” vents that put out a constant stream of methane and hydrocarbons. Life on Europa would not need or use sunlight, since it never reaches the icy depths. 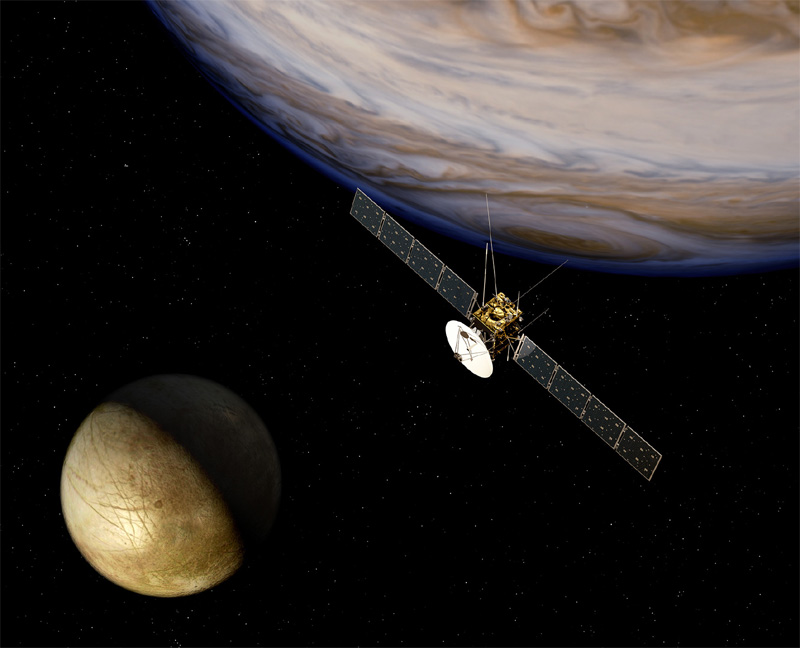 However, it is also possible that Europa’s core is hot but that the heat is carried through the planet by “warm ice”. This warm ice would be much warmer than the planet’s -170°C surface but would remain well below the freezing point of water. In this model, liquid water heavy with metal salts would exist as a thin shell around the planet’s rocky core, rapidly freezing as the tidal heat moves through the planet. Until a probe is sent to Europa like the probes sent to Venus to map its surface with ground penetrating radar or a probe to drill through the ice, this question will likely remain the subject of speculation. The ocean under ice theory became commonly known by the movie “2010″, based on a book of the same name by science fiction author Arthur C. Clarke.

Pioneer 10 and Pioneer 11 flew past Jupiter and sent back grainy images of Europa. Clearer images of Europa were sent back to Earth by the Voyager probes. The Voyager craft were close enough to find smaller moons closer to Jupiter that were not previously known. The Galileo mission was launched by NASA in 1989. Galileo arrived in Jupiter’s orbit in 1995. Galileo flew past Europa, providing the best information we have on the moon. Europa is regularly studied by the Hubble space telescope. New Horizons flew past Europa two decades later on its way to Pluto.

The European Space Agency is planning a mission to Europa. The Jupiter Icy Moon Explorer is slated for launch in 2022. This craft is nicknamed JUICE.