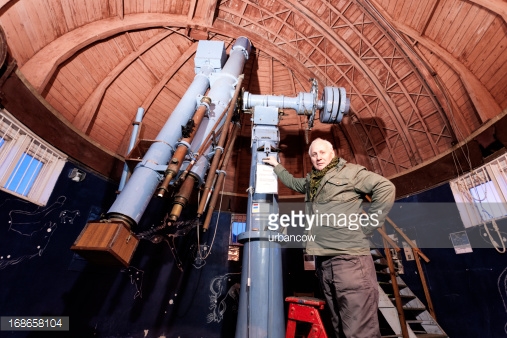 An astronomer standing next to a telescope in a dome at the Norman Lockyer Observatory, Sidmouth, UK. © iStockphoto/Mansi Ltd

People all over have shown interest in becoming an astronomer, but want to know more about what it is that astronomers actually do. To be honest, there are quite a lot of things that are done on a daily basis by astronomers from office work to teaching at seminars or schools. These things are ones that you should be prepared for should you decide that you are going to be an astronomer.

You are going to be working in an office an awful lot, which sound incredibly boring, but it is one of those things that has to be done and is part of the astronomer job description. This is where you will do the bulk of your research, and it is also where you will keep track of your institution work and your day to day work. No matter how much you try and dodge it, you are going to have to do this work eventually. You would be surprised how much paper work can pile up as an astronomer if you don’t stay on top of it. Also, knowing how to handle a computer and programming skills are a must. You will be spending a lot of time in front of one, so you might as well know how to use it.

Teaching is a huge part of being an astronomer. There are going to be tons of seminars and universities that are going to want you to be apart of the teaching. These are great ways to get your name out their in the world of astronomy, plus it is a great way to get others involved in a field that is starting to see significant growth. This is just a part of the astronomer’s routine, as there is really no way around it. If you want to get into this profession, you are going to be teaching people about astronomy at one point or another.

Believe it or not, a lot of the time we are also observing. After all, you are never going to prove anything or confirm anything if you don’t take the time to look. This may require you to relocate to a temporary position in another country or state. This is part of the traveling category that was discussed above. This might not be one of the more exciting parts of the job description, but it is most definitely one of the more important.

Surprisingly, despite the fact that astronomer’s make a decent amount of money it is not common for people to talk about pursuing a career goal of becoming an astronomer. When someone decides that they want to become an astronomer it is not for the money at all. In fact, it is simply because they have a fondness of studying the space and the stars.

The Bureau of Labor Statistics has indicated that currently in the United States there are only three industries that hire astronomers. Educational institutions happen to be one of the industries such as colleges and universities. Here an astronomer is said to be able to make at least $76,670 annually. However, if one works in the scientific research and development industry they can expect to make $107,170 annually. Lastly, if they were in the federal government they can expect to make $130,570.

As you may have imagined astronomers experience level as well as location is going to be a factor as to how much they are paid. Maryland is the state with the most astronomers and they are making approximately $128,520 annually which makes Maryland the highest paying state for astronomers. California also made the list back in 2009 due to the fact that their astronomers were bringing in $118,320 annually. Texas ranked in number five on the list paying their astronomers $87,870.