Titan. © based on NASA images

Titan is the largest moon of Saturn. It is the second largest moon in our solar system. Titan is larger than the planet Mercury, though it is not as dense. It is about half the size of Earth.

Titan’s surface averages -178°C, a temperature where water is always ice and methane is liquid. Titan orbits Saturn about every 16 days. Titan’s “day” is as long as its rotational period of 15.9 days; this means that the same side of Titan faces Saturn as it rotates. Unlike many moons of Jupiter, Titan lacks a magnetic field. It does not have a molten core. 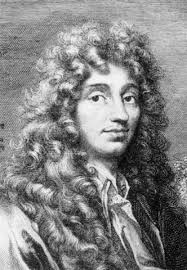 Titan was discovered by Christiaan Huygens in 1655. He discovered Titan about 45 years after Galileo found Jupiter’s moons. His task was somewhat easier given the high reflectivity of Titan by its atmosphere. The moon was officially named Titan by John Herschel in 1847.

The Titans were the parents of the Greek Olympian gods. Saturn or Cronus was the father of Jupiter or Zues. The moon Titan is named for the family of gods that came before the Greek gods for which most of our solar system‘s planets are named.

Titan is the only moon in our solar system with a dense atmosphere. Titan’s atmosphere is a dense yellow haze with occasional clouds. Atmospheric pressure is actually higher than on Earth, roughly 60% greater. It is also the only body other than Earth with liquids on its surface. The Cassini spacecraft discovered that Titan’s atmosphere allows liquid hydrocarbons to mimic the water cycle on Earth complete with ethane haze and methane rain. However, most of the atmosphere is comprised of nitrogen. In 2012, Cassini also proved that Titan’s atmosphere has a faint airglow where the atmosphere of Titan is excited by the magnetic field of Saturn or possibly internal chemical processes. The glow at 400 miles above Titan’s surface is caused by the magnetic field of Saturn breaking down molecules in its atmosphere. Cassini also found a glow at about 190 miles above the surface, though the cause of this deeper glow is not known.

The thick atmosphere of Titan. © based on NASA images

A vortex has been seen over Titan’s north pole and south pole. The north pole vortex was first seen in 2004. A vortex over the south pole was spotted in July of 2012. The vortexes are compared to convection storms that form over Earth’s oceans, and they are probably related to seasonal cooling.

Titan’s atmosphere rises about 600 kilometers above the surface, far higher than Earth’s atmosphere. This is due to the lower gravity of Titan. The large atmosphere actually fooled astronomers into thinking the moon was much larger until Voyager flew by in 1980 and measured the true size of the solid body.

Titan has methane and ethane lakes mostly around the equator and southern pole. The Cassini probe has proven that the lakes remain present through Saturn’s year and do not evaporate during Saturn’s summer. Most of the lakes are around Titan’s equator in a region called Shangri-La. The Huygens probe landed in a methane lake in 2005 around half the size of the Great Salt Lake. The lake Huygens explored is at least three feet deep.

There does not seem to be enough rain to replenish the lakes compared to the rate of evaporation into the atmosphere; this suggests that they are supplied by underground aquifers of hydrocarbons. The Cassini probe has captured images of methane and ethane rivers carving deltas into the moon’s surface. Researchers from the Massachusetts Institute of Technology and University of Tennessee at Knoxville have studied images of the moon and suspect that some of the river channels are millions of years old. This supports the theory that liquids have been on Titan’s surface for millions of years, but it also suggests that the liquids flow more slowly than water does on Earth.

Titan has windswept dunes near its poles. Titan has mountains, though they are only several hundred meters high. There are several mountains on Titan suspected of being cryovolancoes. Cyrovolcanoes do not erupt hot lava. Instead, they erupt frozen water ice, nitrogen compounds like ammonia or hydrocarbons like methane. Cryovolcanoes could be what renews Titan’s atmosphere, spewing methane, ethane and nitrogen compounds. While there have been no recorded images of cryovolcanoes on Titan, they have been documented on Enceladus, another of Saturn’s moons, and Triton, a frozen moon of Neptune. Titan has few craters on its surface. This is due to the weathering effects of its atmosphere and liquids flowing across it. The Huygens probe seemed to bounce on solid material and throw up hydrocarbon aerosols when it landed on Titan. However, the Huygens probe has found wet mush as it has explored the surface of Titan. This suggests that it rains regularly on Titan.

Voyager 1 passed by Titan in 1980. Its cameras could not get clear pictures of Titan’s surface through the atmosphere. The Hubble space telescope in 1994 took images that found a continent on the surface of Titan. 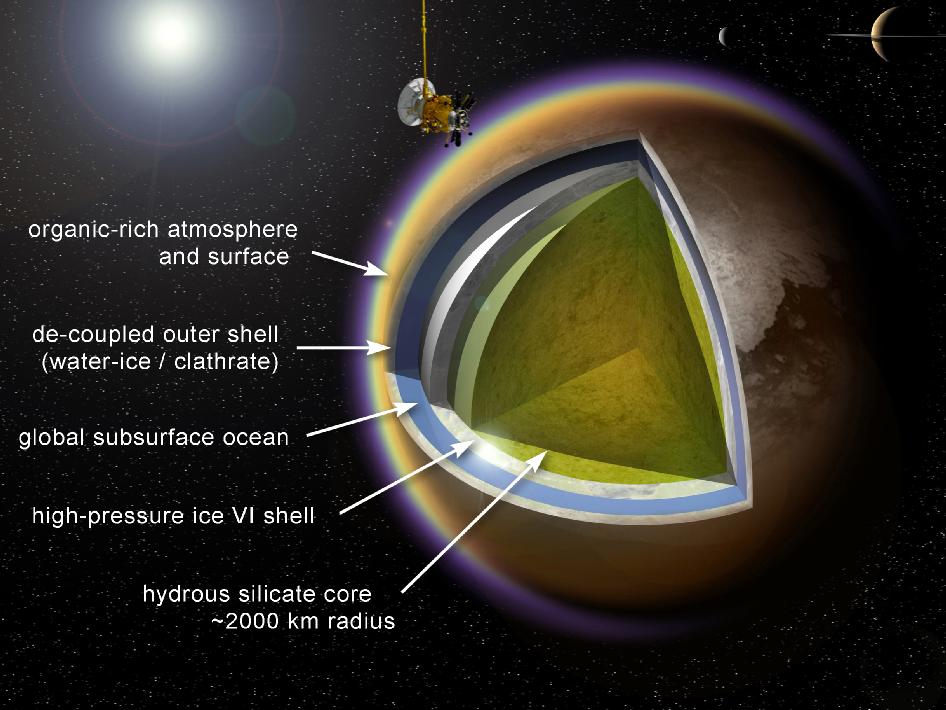 NASA sent the Cassini space probe to Saturn in 1997. It arrived in 2004. The European Space Agency supplied the Huygens probe that landed on Titan’s surface.

Is there life of Titan?

There is no known life on Titan. If it did exist, it would be adapted to much lower temperatures and a radically different biochemistry than life on Earth. Titan has a hydrocarbon liquid similar to the carbon rich seas of Earth in its past and an atmosphere. If life did exist, it would use methane and ethane in place of water-based chemistry. No known life on Earth would survive on Titan.