The planet Saturn is named for the Titan Saturn, father of Jupiter, the Greco-Roman king of the gods. Saturn’s largest moon is named Titan. Titan’s claim to fame is that it is the only moon in the solar system with its own atmosphere. Titan’s atmosphere is mostly comprised of hydrocarbons like methane. Saturn is most famous for its massive rings. The rings of Saturn are held in place by the moons orbiting Saturn in that plane. Saturn is the last planet visible with the naked eye from Earth. Its rings are visible with a low power telescope. Saturn is about nine times as far from the Sun as the Earth. Saturn’s year equals about 29.5 Earth years. However, its day is less than 11 hours long.

Giovanni Cassini was an Italian astronomer who discovered the first of Saturn’s moons. Christian Huygens discovered Saturn’s largest moon. While Cassini saw the bulge around Saturn in his initial observations, it was Huygens who correctly identified them as rings. 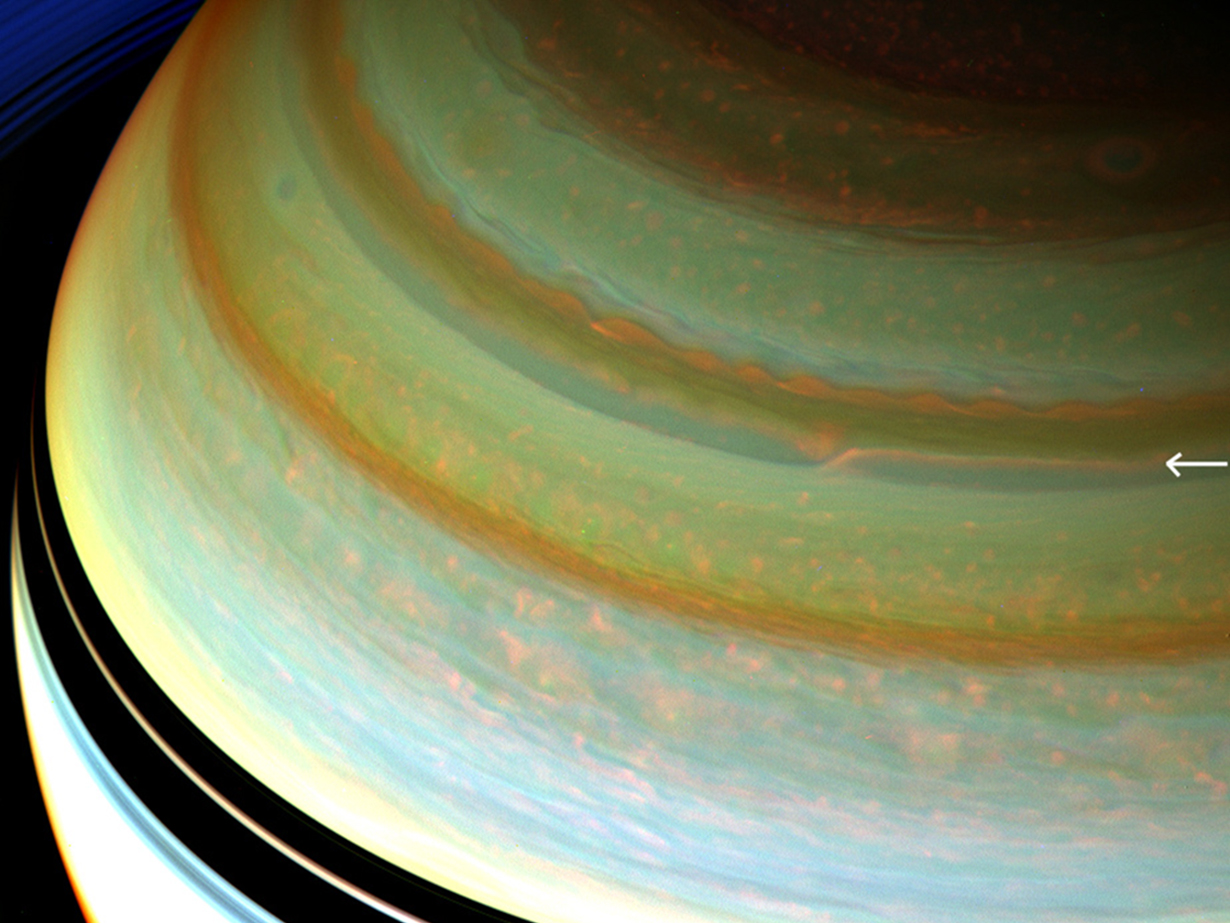 Saturn’s atmosphere is rendered yellow by the ammonia it contains. Saturn is about 70% hydrogen. The rest of the planet is helium. Its atmosphere contains traces of nitrogen, oxygen, carbon and iron.

Probes have recorded wind speeds over a thousand miles an hour on Saturn. Saturn’s winds are fastest at its Equator. Saturn’s north pole has a hexagonal cloud pattern that is unique in the solar system. Another storm rages on Saturn’s south pole, though it does not have the six walled shape of the northern storm.

Saturn also has auroras similar to Earth’s aurora borealis. Images of this were captured by the Hubble telescope in orbit above Earth.

Titan is the second largest moon in the solar system. Only Jupiter’s moon Ganymede is larger. Titan is even larger than the planet Mercury. Saturn’s moon Rhea may have its own rings and a thin atmosphere, but this can only be confirmed by further study. Enceladus has an icy shell and a solid core heated by flexure like Jupiter’s Europa. Enceladus may harbor a liquid ocean between its heated interior and frozen exterior. Saturn’s moon Mimas creates the largest break in Saturn’s rings. 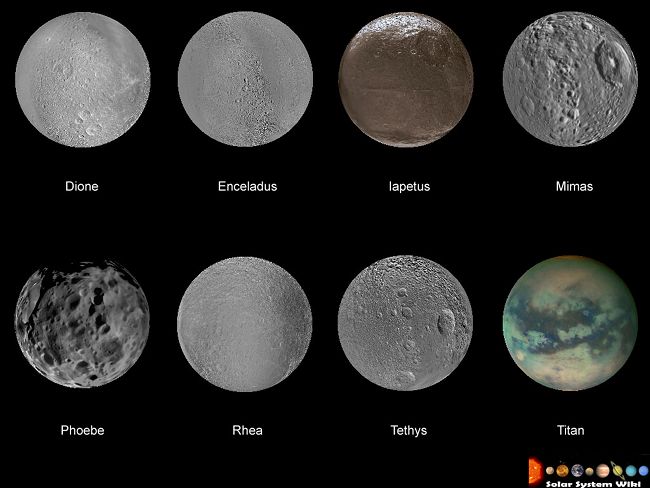 Some of Saturn’s moons. © NASA

To date, sixty three moons have been discovered around Saturn. As astronomers gain access to better telescopes and our probes to that planet continue their investigation, that count may continue to rise. Moonlets are the small bodies within Saturn’s rings while the term “shepherd moons” is used to refer to moons on the outside of its rings, helping hold the ring matter in place.

Saturn’s rings extend out up to 200 times the diameter of the planet, which is what makes them so spectacular. The rings of Saturn are very thin. They are comprised of ice crystals and rocks thought to be the size of boulders. The rings of Saturn also contain a number of moonlets, bodies too small to be named moons but larger than boulders. 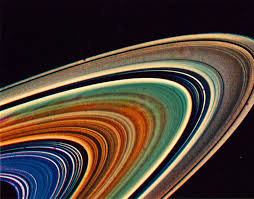 The rings of a planet would be expected to collapse into a moon or become crash down to the moons that already exist. The thin ice rings of Saturn may be refreshed by natural phenomena. For example, the E ring of Saturn is thought to be renewed by matter ejected by periodic eruptions of Enceladus. Enceladus erupts ice from its volcanoes the way Io ejects molten rock from its volcanoes. This either replenishes Saturn’s rings or is responsible for the creation of the youngest rings.

Saturn’s rings are giving letters of the alphabet in the order of their discovery. Rings A and B are visible from Earth. The Cassini division is the dark, relatively empty band between them. Ring F, the outermost ring, has a braided appearance.

Saturn’s rings also have straight lines through them called spokes. Unlike the gaps in Saturn’s rings, these features are not caused by Saturn‘s moons. These structures are thought to be the result of interaction with Saturn’s magnetic field which is 580 times greater than that of Earth. 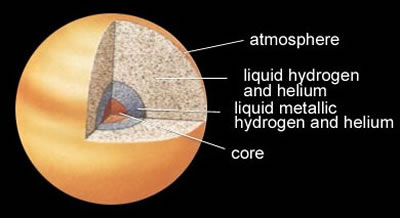 While Saturn’s year is much longer than Earth‘s, Saturn spins so quickly that its day is only 10 hours and 47 minutes. This has been confirmed by measuring the variations in the radio signals and radiation emitted by Saturn’s core. The magnetic field and radio signals emitted by Saturn’s core are thought to be the result of its liquid metal core rotating around the solid core, similar to Earth’s magnetic field being the result of the rotation of its liquid iron core.

The pressure of Saturn‘s atmosphere is so dense that astronomers think that it has a planetary core of rock covered by a layer of liquid or even solid hydrogen and helium.

If you could stand on Saturn’s surface, you would weigh almost as much there as you would on Earth. Because Saturn has such a low density, the gravity is barely much more than Earth’s despite the large size of the planet. Saturn’s density is lower than that of water.

Saturn like other gas giants has been cooling since its formation. The helium in the Saturn’s core is condensing into a hydrogen-helium liquid. However, the process change from gas to liquid releases heat. The heat from this phase change is thought to power the atmosphere of Jupiter and contribute to its magnetic field. 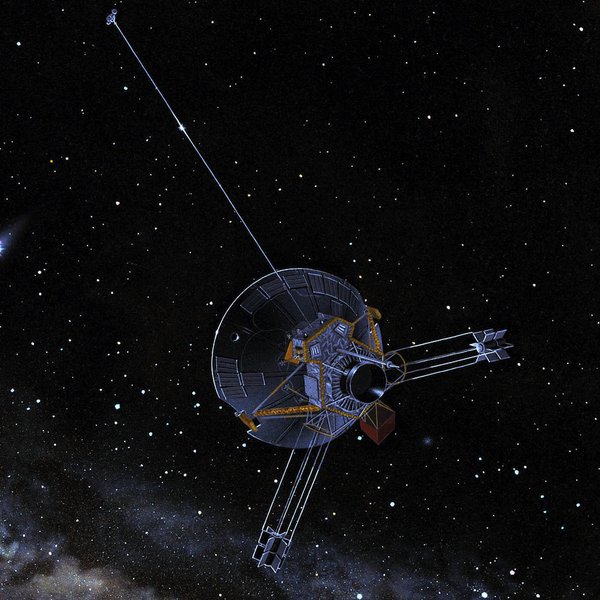 Saturn has received a number of space probes. Pioneer 11 was the first probe to fly past Saturn. Voyager 1 and Voyager 2 also flew past Saturn. The Cassini-Huygens spacecraft was a joint endeavor between the American NASA program and the European Space Agency.

The Cassini-Huygens craft was the first space craft sent directly to Saturn. The Cassini probe has discovered fifteen of Saturn’s moons since arriving in 2004. More than ten of them are still unnamed.

The Cassini probe went into orbit around Saturn while the Huygens probe was dropped onto Titan. Images from Huygens revealed liquid hydrocarbons on Titan creating lakes and streams. Methane and ethane take the place of water in Titan’s “hydrosphere“, evaporating and then raining down.

Saturn has an axial tilt like the Earth. Earth’s axial tilt is roughly 23° while Saturn has a 27°. The hemispheres that are in winter take on a bluish hue. Saturn’s rings tilt along with the planet. When Saturn is at its greatest axial tilt, humans enjoy their greatest view of Saturn’s rings. Saturn’s rings are edge-on relative to Earth during Saturn’s equinox. Continuing observation of Titan have shown that the Titan “lake district” with several lakes of hydrocarbons have grown and shrunk with Saturn’s seasons but have not dissipated entirely. However, summer on Saturn is still freezing to us. The Huygens probe recorded temperatures of -290°F on Titan’s surface.