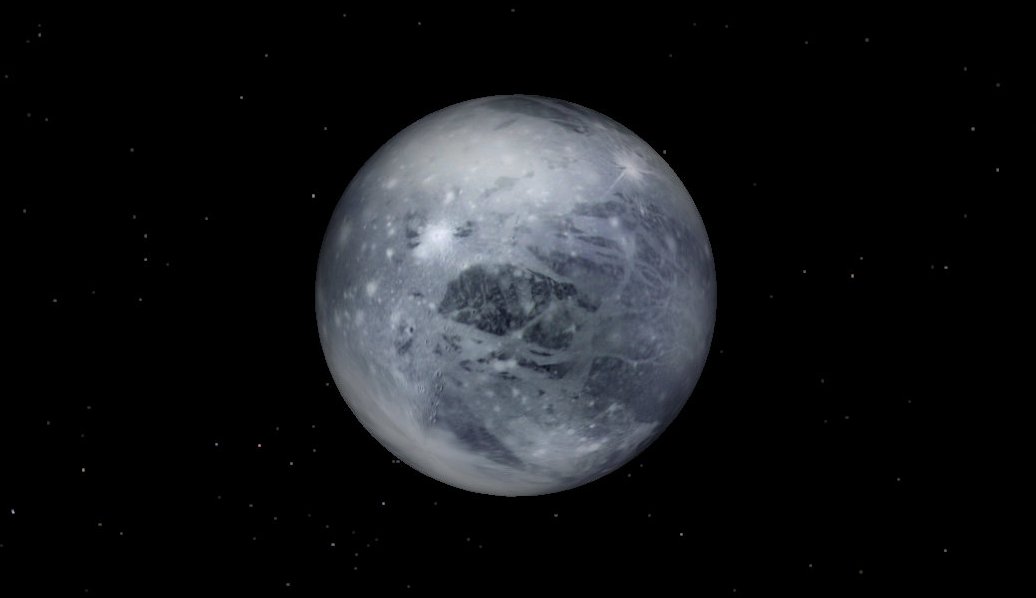 Pluto. © based on NASA images

Cold, dark, and icy. These words describe Pluto, a tiny body orbiting the sun near the edge of the solar system. Pluto’s average distance from the sun is about 3.7 billion miles (5.9 billion kilometers). This distance is so great that Pluto receives 1,000 times less light and heat from the sun than Earth does.

Pluto has traditionally been called a planet. But many astronomers have expressed doubts. In 2006, the International Astronomical Union (IAU) announced that Pluto failed to satisfy the definition of a true planet. According to the IAU, a true planet must orbit the sun. It must contain enough mass for its own gravity to shape it into a sphere. And it must be massive enough to clear its neighborhood of all other significant bodies.

Pluto does not meet this last requirement. Pluto is just one of a vast number of bodies inside its neighborhood, which is a region called the Kuiper belt. In 2006 the IAU decided to call Pluto a dwarf planet. A dwarf planet is massive enough to have shaped itself into a sphere. However, it is not massive enough to dominate other bodies in its neighborhood, adding them to its own mass or knocking them away. It also cannot be considered a satellite of anything but the sun. In 2008 Pluto became the first dwarf planet to be called a plutoid.

During Pluto’s 248-year trip around the sun, its distance from the sun varies from about 2.8 billion miles (4.4 billion kilometers) to as far away as 4.6 billion miles (7.4 billion kilometers). All the bodies orbiting the sun travel in elliptical (oval-shaped) orbits. But Pluto’s orbit is more elliptical than any of other planets that follow an orbit closer to the sun. At its aphelion, the point in orbit at which a body is farthest from the sun, Pluto orbits far beyond Neptune, the eighth planet from the sun. But at its perihelion, the point in orbit at which a body is closest to the sun, Pluto is much closer to the sun than Neptune.

Another strange characteristic of Pluto is its orbital plane. This is the tilt of its orbit in relation to the orbits of all the planets from Mars to Neptune. The orbital planes of these bodies are tilted only slightly from each other. But Pluto’s is tilted at a 17-degree angle. 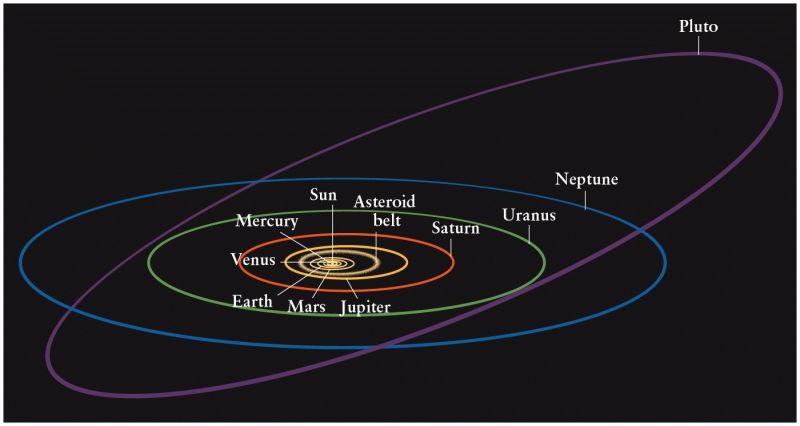 For many years, Pluto was too far away for even the largest telescope to reveal any of its details. However, a few astronomers measured the body’s position and brightness from time to time. They learned that it takes tiny Pluto a little more than six days to rotate once on its axis. This fact was determined by observing the small variations in Pluto’s brightness that is visible from Earth.

After more detailed studies became possible, it was found that Pluto consists of a mix of rocky materials and ice. It was also observed that Pluto has a thin atmosphere of methane gas. Pluto may have only a part-time atmosphere, however. In 1989, Pluto was at its closest point to the sun. It was warm enough so that the methane on the body was in a gaseous state. However, as Pluto moves farther away from the sun, it will become colder. By the year 2020, Pluto will be so cold that all the methane in its atmosphere will freeze and form a layer of methane ice on the body’s surface. During its 248-year orbit around the sun, Pluto may have an atmosphere for only about 60 years.

The discovery of Pluto’s moons

Astronomers have discovered that Pluto has five known moons, Charon the largest one is too big in relation to Pluto. Its diameter of 746 miles (1,200 kilometers) is more than half the diameter of Pluto. In addition, Charon is only 12,200 miles (19,640 kilometers) away from Pluto. No other moon in the solar system is as large in relation to the body it orbits. And no other moon is as close to the body it orbits. 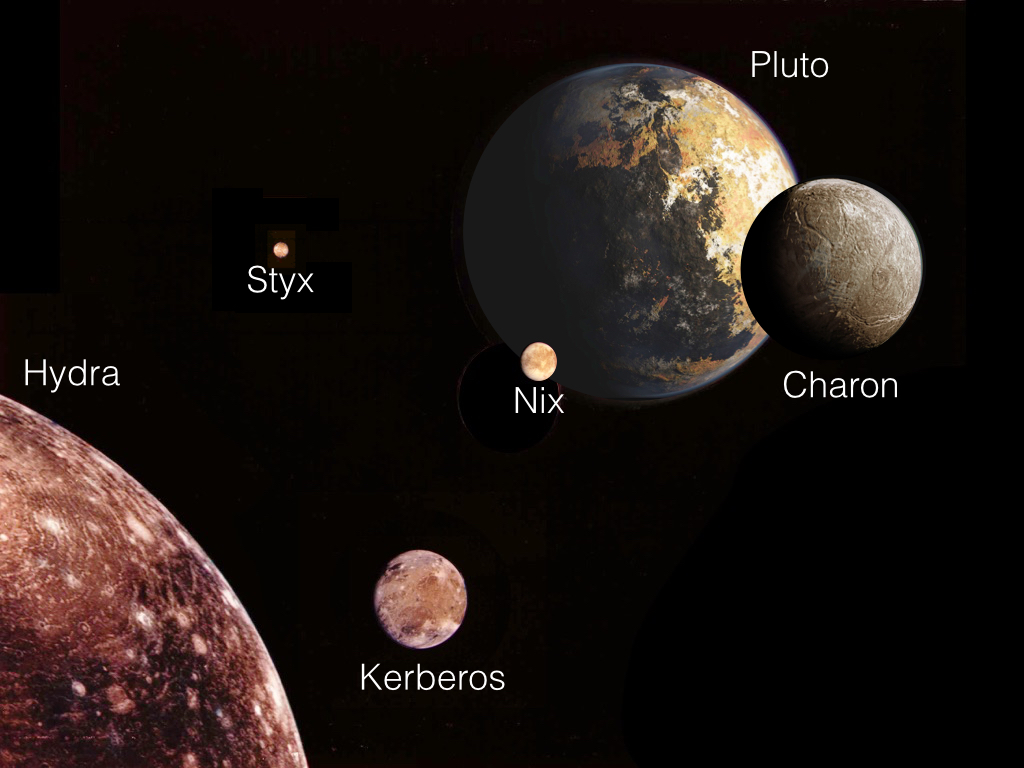 The origin of Pluto

Orbital resonance results in a series of gravitational pulls by the larger body on the smaller one. This means that if Pluto slows down a bit, Neptune’s gravity causes it to speed up again. If Pluto speeds up, Neptune’s gravity causes it to slow down. The result of the orbital resonance of Pluto and Neptune is that the two bodies will never collide. 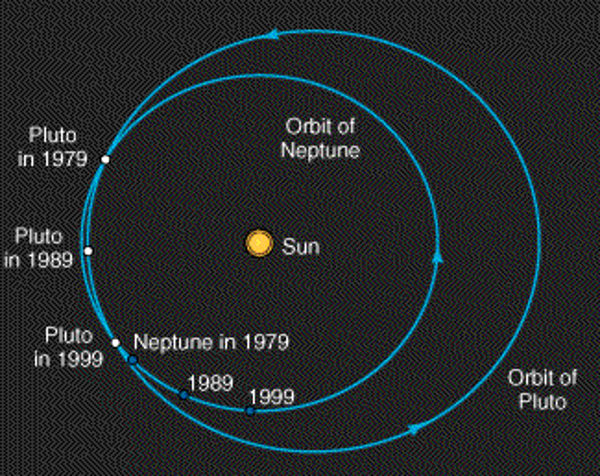 Orbital resonance may also help explain what Pluto is and why it exists. Astronomers think that Pluto may be the sole survivor of the time early in the history of the solar system when the planets were forming. When the sun condensed from a large cloud of interstellar gas, the matter that was left over formed a thin disk circling the sun. Solid materials formed as tiny grains of rock and ice in this disk stuck together in larger and larger clumps. Over millions of years, these growing clumps of matter became the planets.

Astronomers think that during this time, thousands of icy bodies about the size and shape of Pluto formed in space beyond Jupiter and Saturn. As these mini-planets orbited the sun, they collided with one another and formed the planets Uranus and Neptune. Eventually every Pluto-like body, except Pluto itself, had disappeared. Why did Pluto never collide with Neptune even though its orbit takes it close to the larger body? The answer may lie in the 3:2 orbital resonance between the two bodies. Even though their orbits cross, Neptune and Pluto never move through the intersection at the same time. Therefore, Pluto was the one body out of thousands that escaped Neptune’s gravitational pull.

Astronomers are anxious to learn much more about Pluto. If they are correct in their assumption that Uranus and Neptune formed from thousands of Pluto-like bodies, then Pluto may help reveal more about the nature of the early solar system.