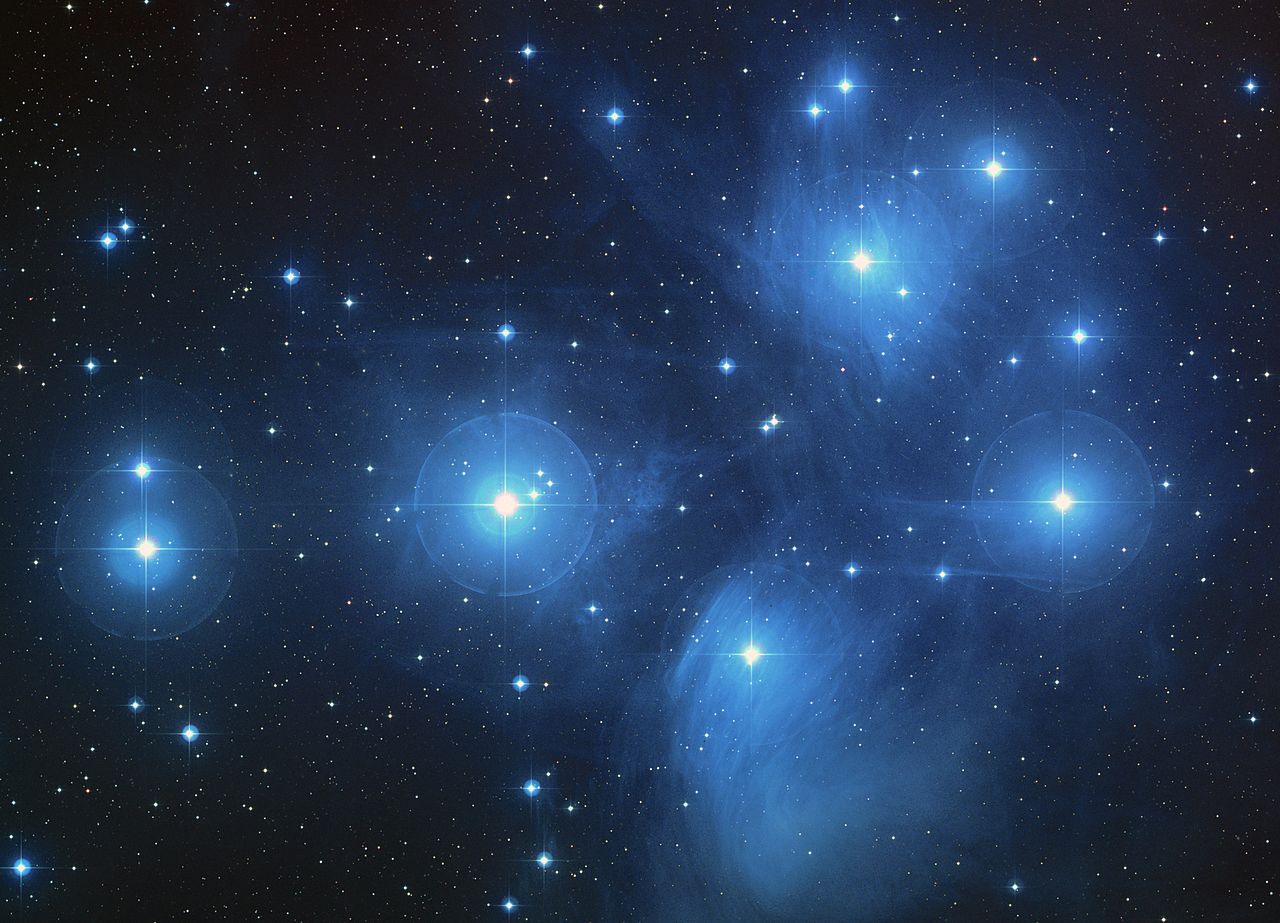 The Seven Sisters, otherwise known as the Pleiades (or M45), is an open star cluster that can be observed anywhere in the world including at the North Pole and the bottommost tip of South America. Amateur and professional star gazers can find the stars by first locating Orion’s belt. To right of this well-known triplet of stars is a V-shaped pattern that outlines the face of Taurus the Bull. The bull’s eye, Aldebraran, is the brightest star in the cluster, and a short distance past it defining the bull’s shoulder is the Pleiades cluster.

In Arabic, Aldebaran is the word for ‘follower’ and was given to the star because its position in the sky makes it appear to be chasing the Seven Sisters. In the northern hemisphere, the Pleiades rise in the east and sets in the west, and Aldebaran follows shortly after. In the southern hemisphere, however, it is Aldebaran who is chased by the Pleiades.

The Pleiades presents as a mist of stars and is associated with winter; possibly because during the entire month of November, the grouping can be seen anytime from dusk to dawn. However, the cluster is observable in the evenings up until April.

It is believed in the astronomy community that the stars were created at the same time 100 million years ago from a swirling cloud of dust and gas. These stars are bound together by gravity, live about 430 light-years away, and actually consist of several hundred stars. They travel through the cosmos together at the leisurely pace of 25 miles per second and many of them shine brighter than the sun.

There are supposed to be seven sisters, but there have been times when only six can be seen. Astronomer Robert Burnham Jr. found that the story of the lost sister is prevalent in many cultures including African, Native American Indonesian, European, Asian, and the Aboriginals in Australia; possibly because it taps into a universal theme.

Like all myths and legends, however, it is possible there is a modicum of fact to support the star’s disappearance. Pleione, the seventh sister, is something of a diva; a complex “shell star” that cycles through various permutations that causes its brightness to fluctuate. Another reason some people are unable to see the seventh star is because of poor eyesight. In fact, those with exceptional vision reported being able to see as many as 20 stars in that area. Maestlin, Kepler’s tutor, was said to have seen 11 Pleiades stars without a telescope.

According to Stephen O’Meara, an expert in dark-sky astronomical observation, to see even the 6 or 7 sister stars you must spend at least 30 minutes in the dark. This makes the eyes 6 times more light sensitive than people who eyes have only adapted to the dark for 15 minutes. Outside of that, you can view the Pleiades cluster through binoculars or a telescope set on low power.

Pleiades as a calendar

The Pleiades has been a source of timekeeping for many cultures and industries. The Greek word Pleiades means to sail, and sailing season usually began in the Mediterranean the first day the seven sisters rose before the sun. The Druids used to perform a ritual on the same day the Pleiades rose at midnight. Coincidentally, we celebrate that day as Halloween; the day, some cultures believe, when the barrier between the living and the dead thins enough for each to interact with the other. The star cluster has also been used in farming, particularly by the Zuni of New Mexico who would begin planting seeds when the Pleiades started disappearing in the evening.