The solar system is composed of the Sun, eight planets, 19 moons, asteroids and a further 161 natural satellites orbiting various planets. There are many observable objects in our solar system though some are more difficult to observe than others. This piece will focus on the most observable objects which are of course the most important to astronomers. 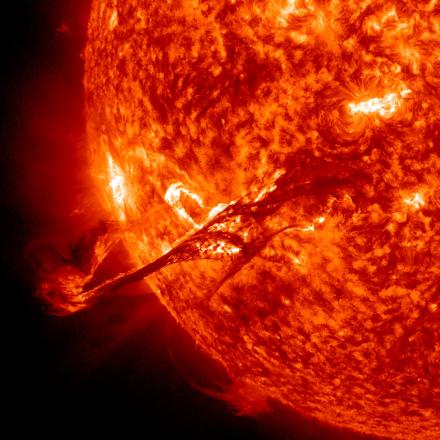 The easiest body to see in our solar system is the Sun. It is the focal point of the solar system thus the name ‘solar system’. Shining at an apparent magnitude of -26.74, the Sun is too bright to observe even with the naked eye. It is highly inadvisable to observe the Sun without any kind of protection to your eyes as it will result in permanent eye damage. There are specially made filters and telescopes for observation of the Sun. Its atmosphere consists of 75% hydrogen and 24% helium while the rest are traces of oxygen, magnesium and other simple elements. It produces all its energy through nuclear fission where hydrogen is converted to helium to release enormous amounts of energy. It is 100 times the size of our planet Earth and is our primary source of energy. It rotates once every 25 days though its rotational period varies with latitude. It is faster at the equator and slower at the poles. The second brightest object in the sky is the moon. It is the only natural satellite of our planet and shines at an apparent magnitude of -12.2. It orbits the earth once every 28 days and rotates once around its own axis in the same period.

This is why we always see the same side of the moon regardless of its position in orbit. Its orbit is superimposed with the ecliptic which explains why it rises and sets just like the Sun. As a result of the Earth’s rotation, the moon appears to move slower than the Sun by 52 minutes each day. An interesting thing to note is that the moon raises at the exact time the sun sets during its full phase. So for at least a day each month it never goes completely dark.

Venus, also known as the morning or evening star is the third brightest object in the sky. Shining at an apparent magnitude of -4.1 at its brightest, Venus outshines all other objects in the night sky. For astronomers who know where to look, it is observable during the day at its longest elongation. It is the only other object that can be observed during the day apart from the moon. Its atmosphere is the harshest in the entire solar system. It has an atmospheric pressure of 92 atms at ground level and temperatures of 4620C. It is composed mainly of carbon dioxide, a feat that has earned it the name ‘greenhouse cauldron’. Its clouds, composed mainly of sulphuric acid, are the reason the planet shines so brightly. So dense is its atmosphere at ground level that an object falls as slowly as it would in water. Since it is an inner planet, Venus operates in close proximity to the sun. As such, it will never be at opposition with the sun. It overtakes earth once every 550 days during which period it makes the transition from morning star to evening star and vice versa. After Venus comes Jupiter in order of apparent brightness. At its brightest, it has an apparent magnitude of -3.0. It is normally brighter than all other stars in the sky as long it is on the same side of the sun as Earth. It is the biggest planet and the largest object in the solar system after the sun. Despite its size, it is a lot less dense than our planet at a density of 0.85g/cc.

It is light enough to float in water! Jupiter has the most ferocious atmospheric storms in the solar system. The Great Red Spot is one such system. It has been in existence for as long astronomers started observing the planet. It has winds of up to 500 kph. Due to its size its gravitational pull is 12 times that of our planet. That means an object weighing 10 kg on Earth would weigh 120 kg in Jupiter! It also takes 12 years to complete a revolution. It has 67 known satellites though only 12 of these have attained hydrostatic balance to be considered as moons. Using a medium power telescope, one can observe these moons from earth.

Mercury, the closest planet to the sun and the smallest, comes next in terms of apparent magnitude. Due to its proximity to the sun, it is the hardest planet to observe. It is best observable at its longest elongation which only lasts for about 5 days before it quickly moves into the glare of the sun again. It has an apparent magnitude of -2.9 at its brightest. It takes 88 days to complete a revolution and 55 days to complete a rotation on its own axis. It is the only planet that does not have an atmosphere and as result experiences a very high temperature gradient. It has no natural satellites.

Mars, also known as the red planet, is the closest planet from Earth away from the Sun. It shines in a distinctive red color due to red iron oxide abidance at its surface. It is roughly 75% the size of our planet and has two moons. It is the only planet to have come closest to having conditions that can support life. At opposition, the planet has an apparent magnitude of -2.5 though it quickly fades away to -1.5 as it moves away from this position. An interesting thing to note is that at opposition, Mars exhibits retrograde motion.

Saturn, the ringed planet, is another interesting planet for astronomers. It has 3 rings along the axis of its equator and is its major distinguishing feature. It is quite dull as compared to the previous planets but if you know where to look you can easily see it with the naked eye. The dullness is due to its distance from earth and the sun cumulatively. Just like Jupiter, it is a gas giant with a density less than that of water. The other remaining planets/dwarf planet i.e. Neptune, Uranus and Pluto are too dim to be seen with the naked eye and are not as marvelous to observe as the other planets – even when observed using a telescope.

Also worth mentioning is our planet Earth. It is the only planet with a clear atmosphere in the entire solar system. This is in addition to an ozone layer that filters out all other waves in the electromagnetic spectrum save for visible light. This is a very important feature without which astronomy on earth would have been impossible.