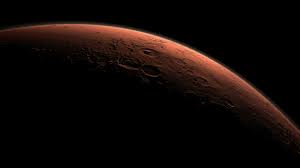 Mars is named after the Greco-Roman god of war. Mars is the second smallest planet in the solar system; only Mercury is smaller. Mars is visible from Earth as a small red body in the sky.

In some regards, Mars is not too different from Earth. The Martian day is only about one hour longer than Earth’s. Mars is 1.5 astronomical units or 1.5 AU from the Sun, roughly 50% further from the Sun than the Earth. One Martian year is 687 Earth days. Martian gravity is less than 40% that of Earth, which is much higher than that of our moon. Mars has an axial tilt similar to the Earth, unlike Uranus which literally spins on its side.

Mars taken by Hubble Space Telescope on June 26, 2001. The colors have been carefully balanced to give a realistic view of Mars' hues as they might appear through a telescope. Especially striking is the large amount of seasonal dust storm activity seen in this image. One large storm system is churning high above the northern polar cap (top of image), and a smaller dust storm cloud can be seen nearby. © NASA/The Hubble Heritage Team (STScI/AURA)

The atmosphere of Mars is predominantly carbon dioxide, nearly 95% of the total. There are also traces of methane that may be left over from its volcanic past. There are hints of methane vents on Mars replenishing the methane in its atmosphere, which theoretically could host life similar to the methane vents on the bottom of Earths‘ oceans. Like Earth, the Martian atmosphere has traces of argon and contains some nitrogen.

The air pressure on Mars is less than 1% that of Earth. However, Mars is capable of planet wide dust storms with wind speeds up to 125 miles per hour. Peak gusts of over 200 miles per hour have been documented. Mars does have clouds, as captured by the Phoenix lander and orbiting spacecraft.

The surface of Mars

The surface area of Mars is roughly the same as the entire land area of Earth. This means that a map of Mars would be as large as a map of Earth that didn’t include the oceans.

The surface of Mars. © NASA

Mars has ice caps visible by telescope. Its ice caps grow and shrink with the Martian seasons. However, astronomers think that the ice caps of Mars are primarily frozen carbon dioxide instead of water ice. Water ice will sublimate or turn into vapor upon exposure to the thin Martian atmosphere. While Venus is insanely hot due to the greenhouse effect its thick atmosphere creates, Mars is endlessly cold. The Martian atmosphere can hardly hold the sun’s warmth. The average temperature of Mars is about -70°F. Temperatures as low as -225°F have been observed. In the summer near the equator, the temperature can get above the freezing point of water. The northern plane of Mars is relatively flat compared to its southern hemisphere. The Mars Express, launched by the European Space Agency, has detected layered sediments that may be proof that Mars once had an ocean in its northern hemisphere. 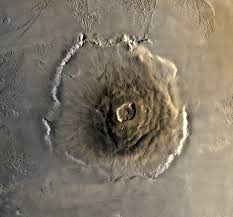 Mars also hosts several massive canyon systems. These canyon systems were originally mistaken for canals made by intelligent beings. Valles Marineris is over 2,500 miles long and rivals the size of Africa’s Great Rift Valley. It and its connecting canyons cover roughly one fifth of the planet. Valles Marineris is larger than the Grand Cayon on Earth, though the Atlantic rift valley on Earth is larger. Some valleys on Mars like Valles Marineris is a literal crack in the planet, while valleys like Parana Basin are probably the result of periodic or catastrophic floods.

Its moons, Phobos and Deimos, are named for sons of Mars. Both Phobos and Demos are thought to be captured asteroids from the asteroid belt.

Mars has been a target of repeated exploration over the past decades. While Venus is roughly the same size as Earth, its thick atmosphere gives it a crushing atmospheric pressure and makes it as hot as Mercury. Mars has signs of ancient oceans and flowing waterwith canyons that rival the Grand Canyon in size but are even deeper. While there is no longer surface water on Mars, it is possible that water ice is mixed into the soil, buried at the polar ice caps or held in frozen underground aquifers. 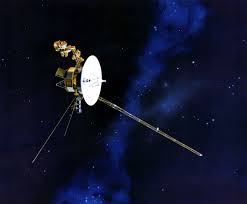 This makes Mars the most likely possibility for off-world colonization. Understanding how Mars lost its oceans and atmosphere can also help us understand the possible future of our own world.

Missions to Mars can be broken down into three categories. Fly-bys only took pictures of the planet. The Voyager 1 and Voyager 2 spacecraft fall into this category. Orbiters entered Martian orbit and took pictures or used sensors to map the Martian surface. Mars Odyssey, launched in 2001, is one of these orbiters. The Express orbiter used radar to map the surface of Mars and subsurface radar to look for ice underneath the Martian surface. We’ve also dropped spacecraft onto Mars to explore for us. The Phoenix lander and Curiosity rover are two examples of this type. Landers remain in one location, while rovers have wheels and can literally roll around Mars. As of 2012, there are five active exploration missions on Mars with more planned for the future.